Notebook is a contestant in Super Object Battle,SOB2 and later Object Lockdown, since Drago quit the show.

He is on Skateboard's Team.

Super Object Battle Two Episode 2 Can You Dig It?

Notebook appears to be pretty lazy, as most of his screentime consists of him either sleeping or watching TV. He also appears to be irritable, whether it's waking him up, startling him, or insulting his size.

He appears onscreen, calling out Burger on calling him fat for mistaking him for Disco Ball. He places 9th-18th offscreen in the challenge.

He is chosen onto Skateboard's team. His team places first in the challenge thanks to Envelope.

Notebook is seen watching static on a television. His team is then put up for elimination. After the credits scene, he kicks away Cherry for irritating him with her backwards dialect.

Bucket and Music Disk try to pull a prank on Notebook by waking him up. This fails with Bucket being scared off by a really angry Notebook.

He is seen sleeping during his team's waiting montage. His team is then put up for elimination.

Instead of competing for the challenge, he just sits back watching static on a television. He is then put up for elimination alongside Sun by Bucket.

Notebook gets eliminated, being sent away to the Black Pitched Room while sleeping. As the votes were hacked, it's unknown how many exact votes he received. 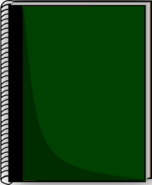 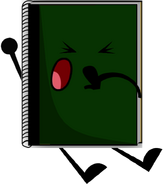 Notebook being noscoped by Bucket